The REPCET® fleet now includes 39 vessels and 5 organizations equipped with the land-based system.

Since July 1st 2017, Article 106 of the Law for the Reconquest of Biodiversity, Nature and Landscapes requires certain vessels flying the French flag to be equipped with a system for identifying and sharing cetacean positions. The REPCET® system meets the requirements of the law and aims to limit the risk of collision, preserve cetacean populations and ensure passenger safety.

In summer, the Mediterranean hosts 8 species of cetaceans thanks to a sea rich in krill, cephalopods and other small fish on which these marine mammals feed. However, it is also during this period that maritime traffic increases, particularly between Corsica and the Continent. Each year in the Western North Mediterranean, it is estimated that 16 to 20% of the whales found dead have been killed as a result of a collision, and many live individuals show signs of these accidents. 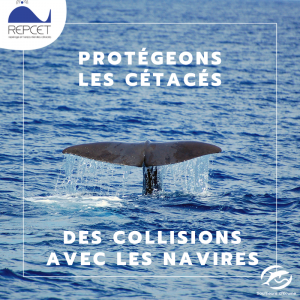 “Far from being anecdotal, collisions with boats are considered to be the main cause of unnatural mortality of fin whales and sperm whales in the Mediterranean. “Denis Ody, Co-Head of the Oceans and Coasts Program at WWF France.

The success of the REPCET® system is based on the density of the maritime mesh size and the number of vessels equipped: the more reports issued and received, the better it is possible to avoid the route of a large cetacean. Today, 39 vessels have REPCET®, including ferries crossing Corsica-Continent, 2 monitoring centres (CROSSMED and CROSS Antilles Guyana) and 3 institutions such as the Port-Cros National Park.

All the news
Get REPCET